Crystals for Sleep – Can Sleeping with These Stones Really Help You Snooze? 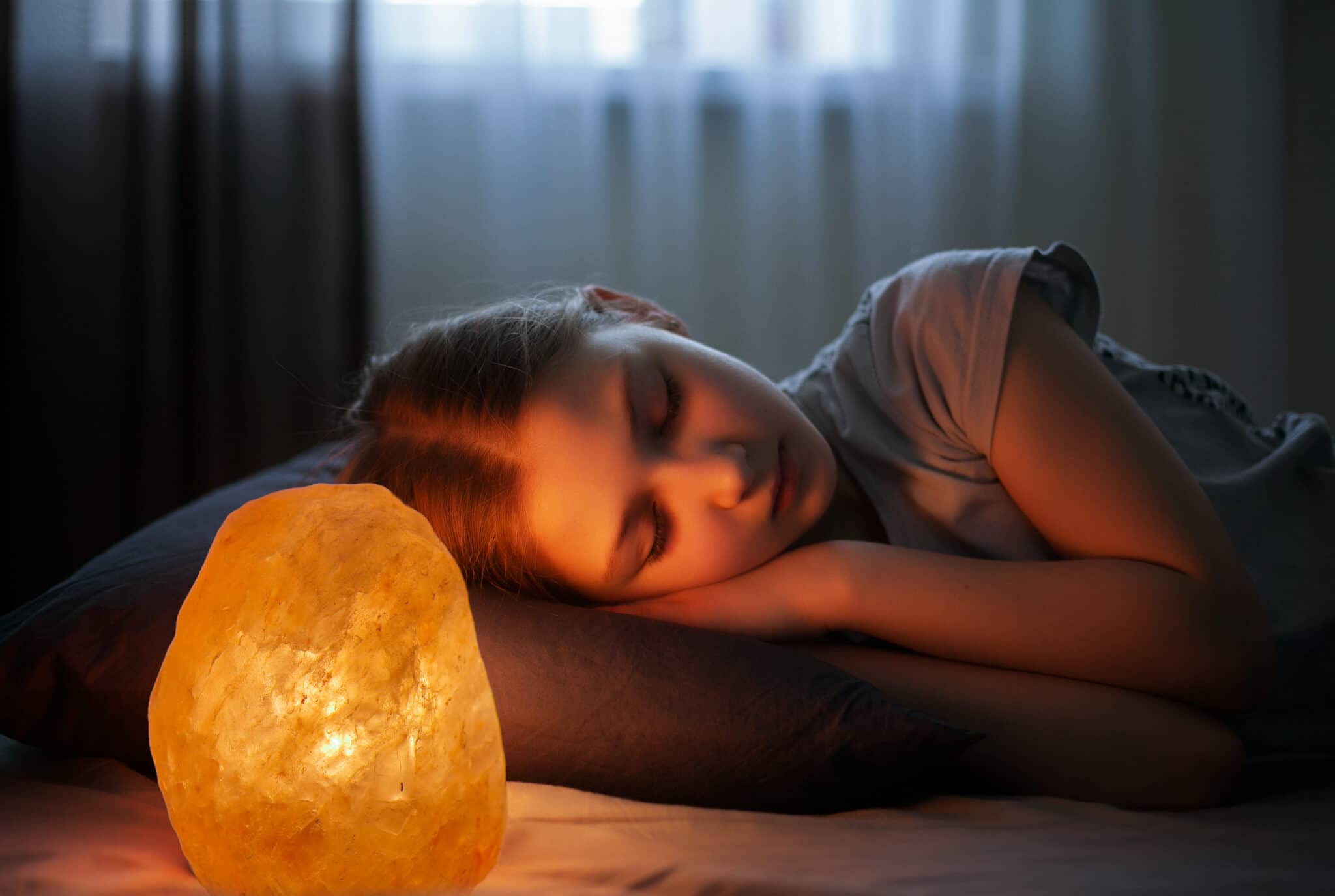 Crystals for sleep have been associated with improving sleeping habits for thousands of years. Due to their unique vibrations and healing properties, different crystals and stones could relieve stress and anxiety, resulting in a good night’s sleep.

Different crystals have recently become increasingly popular as a sleep aid, as they’re said to promote a strong sense of calm and rid of negative energy. While crystals are claimed to help you sleep, how well do these claims hold up?

Currently, there is little to no research that has gone into the effects of crystals, except for one study conducted by Goldsmith’s College psychologist Dr. Chris French in 2001.

In the experiment, 80 volunteers were given information about the history of the “magic” crystals as well as the actual crystals themselves.

While each volunteer received a crystal, only half of the participants obtained the real thing instead of cheap knock-offs. After trying meditation with the crystals, almost all members of both groups claimed to have witnessed the power of crystals on the body.

This was due to the tingling sensation they felt that was described in the information book they read beforehand. According to Dr. French, this is due to the power of suggestion rather than the crystals themselves.

In relation to sleep, it’s likely that any improved sleep that you experience may be due to the placebo effect and not the crystals. However, more scientific research needs to be conducted in order to know for sure

Can Crystals Help You Sleep?

As mentioned before, there aren’t any cold hard facts that prove crystals improve your sleep. However, many energy-healing proponents advocate that placing crystals on your bedside table or anywhere else in your bedroom at night could help provide a peaceful sleep.

That being said, there is no harm in using crystals as a sleep aid to see if it’s effective for you as long as you’re healthy. However, using too many crystals is said to be able to keep you up at night, so it’s important to identify which crystal is right for you and your needs.

The Best Crystals for Sleep

From selenite and moonstone to celestite and black tourmaline, there are an abundance of crystals out there that are said to provide emotional and physical benefits.

When it comes to improving your sleep, you’re likely in search of a stone that avoids nightmares and promotes positive dreams. Below, we’ve rounded up some of the best crystals for sleep so you can fast-track you way to the sleep of your dreams. 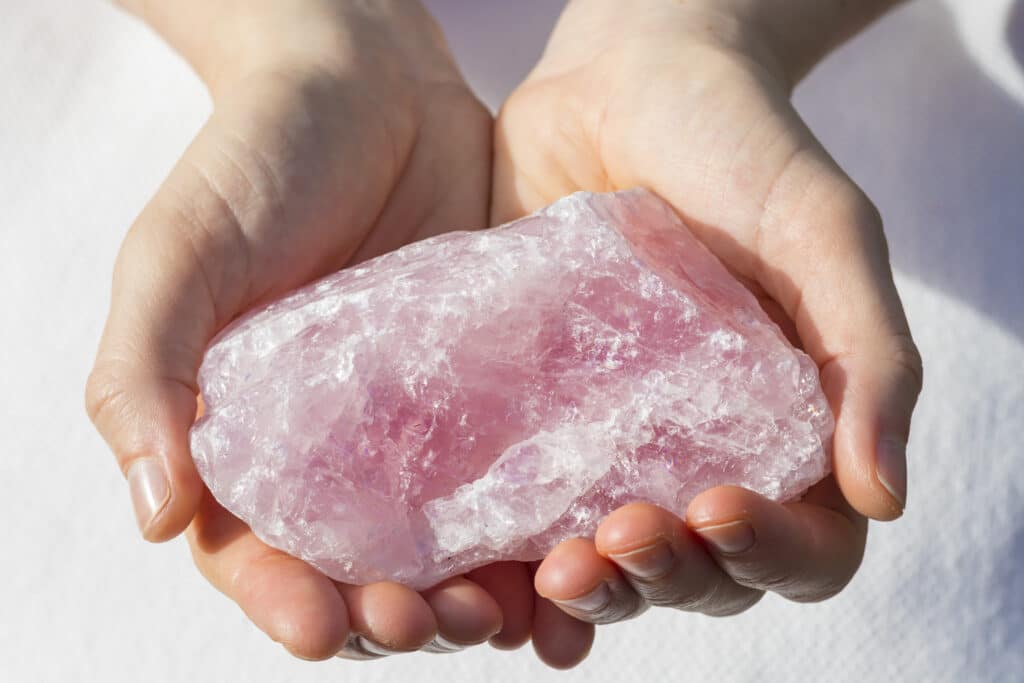 This first stone associated to crystals for sleep is said to be best for light sleepers, as it promotes a deep sleep that allows you to wake up feeling refreshed and ready to take on the day.

Known as “the loving stone”, Rose Quartz is said to provide calming effects to the body and mind as well as promote good dreams while you rest.

When it comes time to go to bed, hold the Rose Quartz stone firmly in your hand, focusing on any anxieties you wish to let go of before your rest. From there, it’s said that the crystal will bring pleasant vibes to your bedroom and a peaceful sleep. 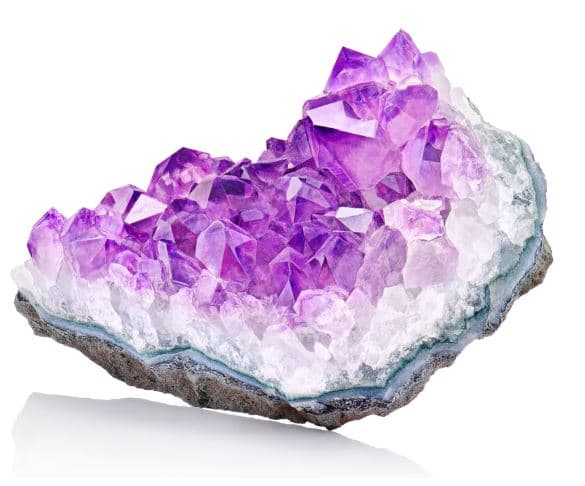 The amethyst stone is most commonly known for its stress-relieving properties, which results in a a good night’s sleep and a deep sleep even for light sleepers.

Crystals such as the Amethyst can be placed under your pillow or anywhere else in your bedroom to rid your mind of negative thoughts and develop a space for positive energy to thrive.

The Amethyst stone is known as the “all purpose” stone, as it can also be useful for getting rid of headaches and any joint pain you feel within your body as an added energy and health benefit. This stunning lilac and purple quartz crystal is great for those new to the crystal space. 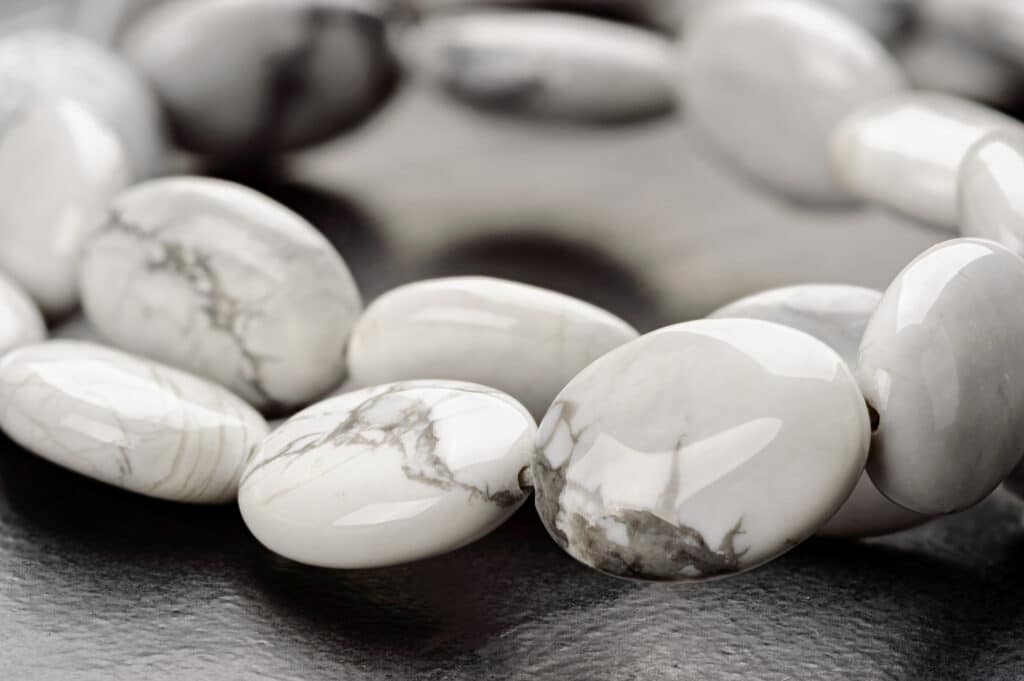 This next crystal is said to have a powerful healing energy that calms even the most worried of minds. The Howlite crystal promotes restful relaxation by slowing the heartbeat in a natural way and lowering your temperature to a stable place, thus resulting in a balance of a soothing and stress-free state of mind.

The healing energy of the crystal is great for those with frequent nightmares and insomnia, as it provides an added layer of protection to the mind and does all negative energy. If you’re looking for a sense of relaxation near bedtime, this crystal might be the right match for you. 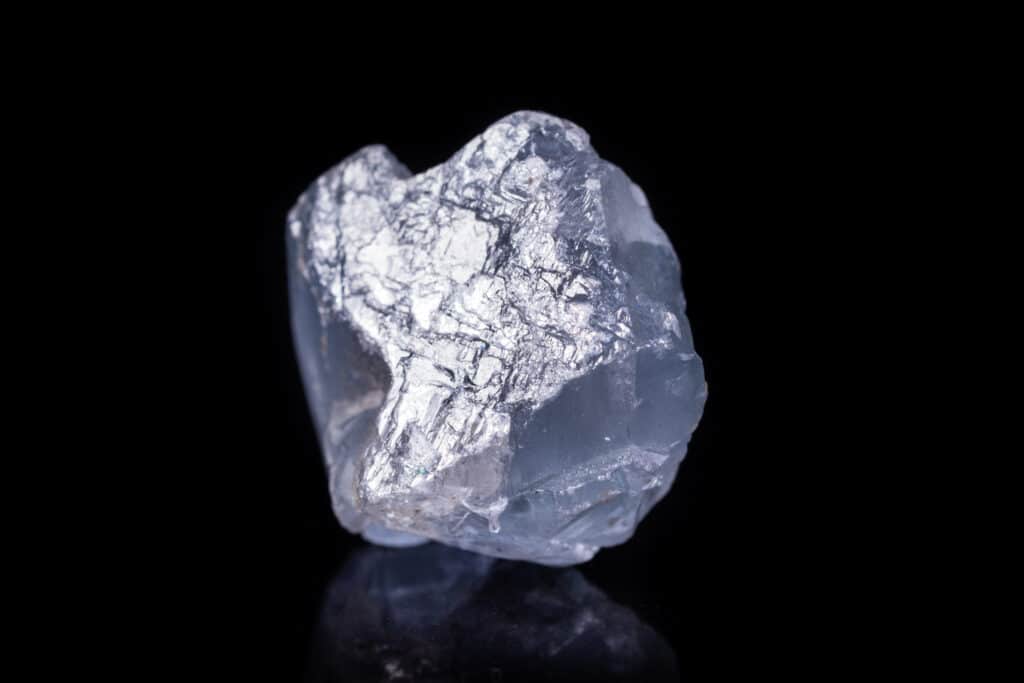 Angelite stones are said to bring a light of energy to your sleep, promoting a high-quality and soothing rest each and every night with its healing energy. If you live an on-the-go, stressful lifestyle, Angelite is said to ease sleeplessness and calm the body with its healing powers.

To utilize Angelite’s power to free you from insomnia and anxiety, simply place the stones on the four corners of your bed, or use the stones for meditation when it gets close to night time for sense of calm. 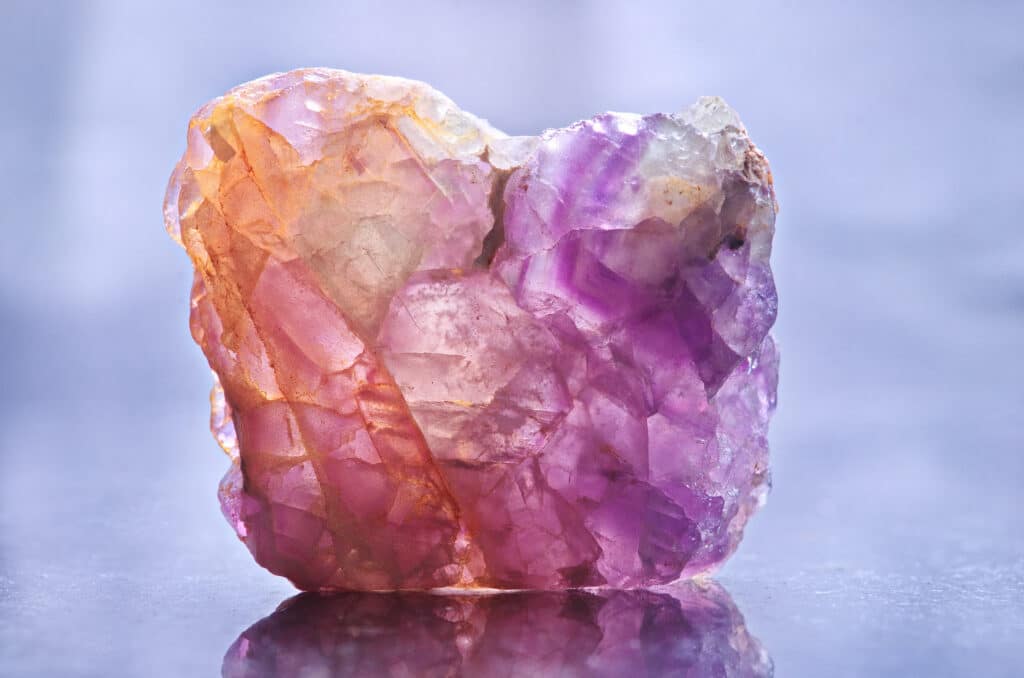 When it comes to Fluorite, many experts advocate for the crystal’s healing energy powers and health benefits for the mind and body. Those who use the energy of Fluorite for sleep are said to experience a high-quality, deep calm sensation that elevates their sleeping experience while they rest.

Fluorite is also said to bring impurities to the surface and ensure balance and harmony to help your relax during sleep and your life. To add Fluorite into your bed routine at night, the crystal can be rotated clockwise above and near your body before bed. As a result, it’s said you will be free of worries before bed. 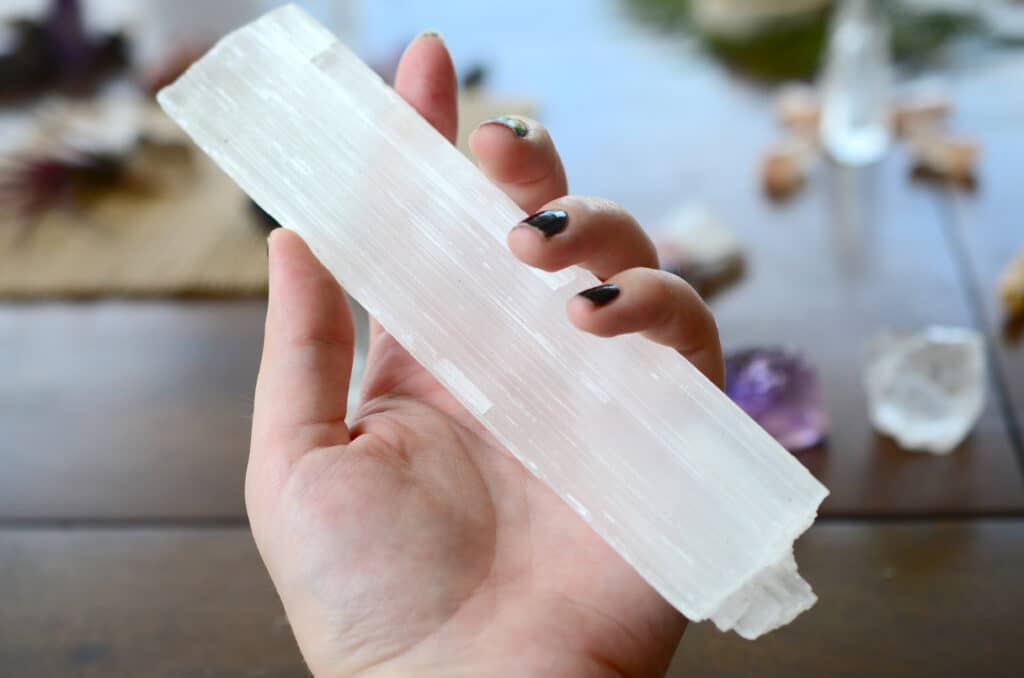 Selenite is said to be the perfect gateway into an anxiety-free, calming sleep due to its high frequency vibrations when placed near the body. Selenite works to bring a sense of peace and balance to your mind before bed by getting rid of all negative energy from your everyday life.

In order for the crystal to improve your health and sleep, place Selenite under the pillow on your bed. Besides the pillow method, Selenite can also be placed on either side of the bed to experience the peace and pleasant energy brought by the crystal.

All in all, it’s widely believed that crystals can do way more than look pretty. When it comes to sleep, it is said that the crystals listed above can promote a peaceful rest that can help you wake up refreshed and rejuvenated. While there is no current scientific research to prove that crystals can help you sleep, it’s not a bad idea to try it out for yourself. 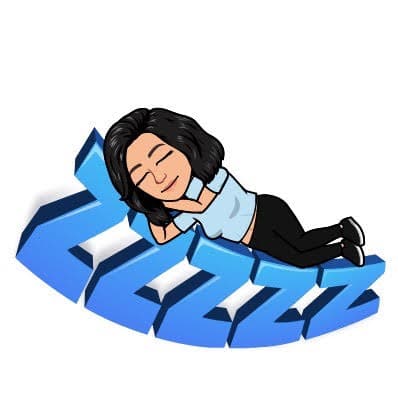 My mother told me to follow my dreams, so I took a nap.
All Posts »
PrevPreviousThe Best Bed Frame with Storage
NextIs It Bad to Have My Dog Sleeping in Bed with Me?Next 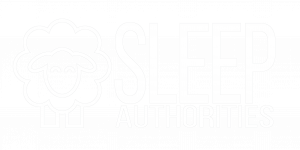